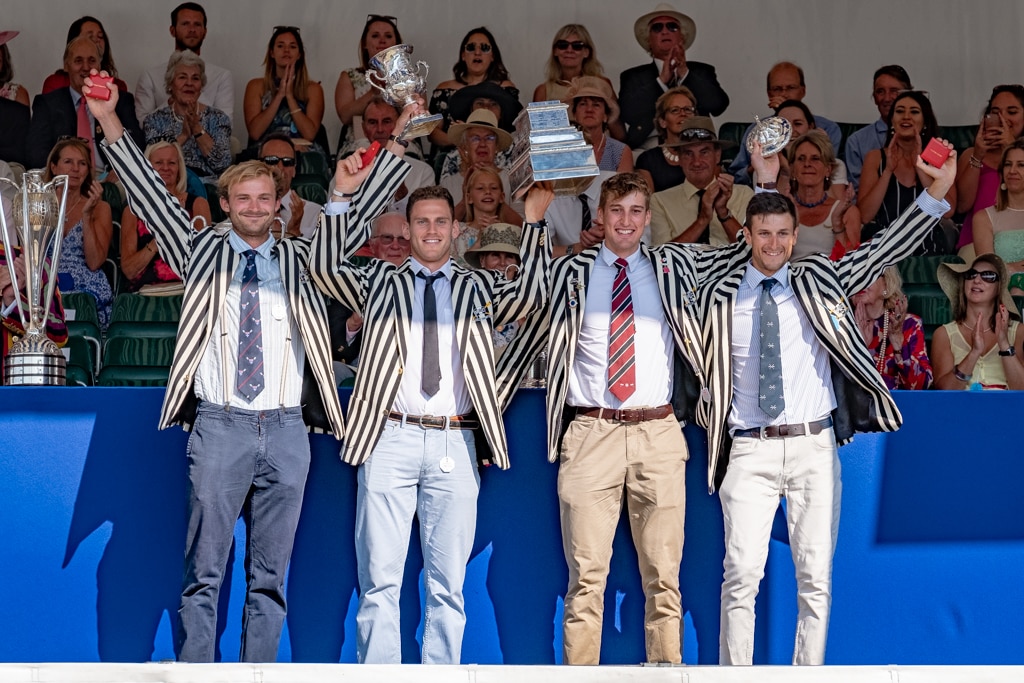 The Henley Royal Regatta is without a doubt one of the most prestigious regattas in the world, a real highlight of the summer sporting and social season in Great Britain.

The Regatta takes place in Henley-on-Thames, Oxfordshire, England, over 5 days and this year more than 500 Rowing clubs and Universities from around the globe, including Olympic medallists and new crews competed.

Collier & Robinson is so proud to be part of the essence of the Henley Royal Regatta as we are the official blazer suppliers for thousands of the participants, coaches, alumni and spectators from UK, USA, Europe and Asia. This year, many of our blazers were worn by finalists and winners of the different challenges. Well done.

The incredibly charming atmosphere around Henley town during the regatta days added to the social events happening at the enclosures by the river Thames – a quintessential British experience in our very own home town!  Looking forward to 2019!

Is there anything quite as bold and yet understated as a blazer? The blazer is a key ingredient in any well-rounded gentleman’s wardrobe. But it also has a varied and well-travelled history throughout the UK and the US. From a functional clothing item to a fashion icon, how well do you know the history of the humble blazer? Where do these vibrantly coloured club blazers really come from, and how did they survive so long?

The Birth Of The Blazer

The very first blazers were meant to be worn by rowers at Oxford and Cambridge. At that stage, they weren’t the sleekly designed, fitted pieces they are today. Instead, they were a very loose-fitting equivalent to a windbreaker, cut from flannel with the sole purpose of keeping the rowers warm during cold training sessions and early morning races. They were also designed in very bright colours, with patterns or stripes unique to each club. This meant that spectators on the shore could easily identify which crew was which and follow the race. The very first rowing blazers were introduced in 1852 and were first spotted in Henley on Thames waters (only a few minutes walk from our own workshop!) But rowers soon started wearing their blazers on dry land as well, particularly around other rowers. In the same way that the 1950’s letterman jackets from America identified an athletic accomplishment, rowing blazers started to serve as status symbols for their wearers.

The term ‘blazer’ itself first appeared in print in 1952, in an article that referred to a red jacket worn by Cambridge’s Lady Margaret Boat Club as a ‘red Guernsey or blazer’. It was a bright (or blazing) red colour, which is how it got its name – the blazer. That same red blazer is still worn by the Lady Margaret Boat Club to this day, and we are still proud to produce them!

What Is A Blazer?

Contrary to popular belief, a blazer is not the same as a jacket (though the two are often confused). The technical definition of a blazer is:

• A stand-alone jacket, worn with trousers of a contrasting colour, pattern or material.
• Solid coloured or featuring a bold, vibrant print (such as tartan or stripes).
• Available in double breasted 6×2, 6×3 or 8×3 configurations, or with a single breasted fassoon.
• Often seen as part of a uniform for a school, club or sports team.
• Feature buttons of a contrasting material. This will usually be mother of pearl, silver, pewter, brass or gilt, and will often be embossed with either the logo of the organisation or a Nelson button (an anchor and a scroll).
• Will usually feature a crest or logo embroidered onto the breast pocket.
• Usually made of serge, hopsack, worsteds, wool flannel, fresco or linen

As you can see, the blazer is a very specific item of clothing – and one that has a long and rich history in British gentlemen’s sports.

But of course, we now know blazers as the slim-fitted, formal jackets sported not just by rowers, but by other athletic groups too. Throughout the second half of the 19th century, you start to see Oxford and Durham universities referring to their jackets as blazers instead. Soon croquet clubs, rugby clubs, football clubs and clubs of all kinds wanted to get in on the blazer phenomenon. So by the 1890’s, all flannel, loose-fitting casual jackets (which were generally brightly coloured at the time), became known as blazers. At the turn of the century, the blazer crossed the Atlantic. Ivy League universities like Princeton, Cornell, Yale and Harvard started to adopt blazers as part of their own athletic uniform.

Since then, the blazer has been part of many fashion movements, styled in different ways and used for all sorts of things. But it’s home is, and always will be found in British Rowing. In fact, the most popular style of women’s blazer in the 1960’s was designed to be an edgy spin on the traditional Henley blazers – a fact very close to our hearts. Since their advent in the 1850’s, the blazer has seen many changes, and while it may now be a key staple for the fashion industry, the rowing blazer will always be a sign of status, of belonging, camaraderie, and of English rowing at its very best.

At Collier and Robinson, we have been producing high-quality rowing blazers for over a decade, with each one lovingly crafted at our studios in Henley on Thames, the home of British rowing. We use only the finest materials, trimmings and embellishments to create striking rowing blazers that ensure your team stands out, even on the water. If, like us, you are proud to carry on such a colourful tradition and want to represent the English rowing heritage, we would be happy to help. Our craftsmen hand make every single blazer using only the finest fabrics from local mills, with every stitch a call back to the first days of British rowing. For more information, just get in touch with us today.